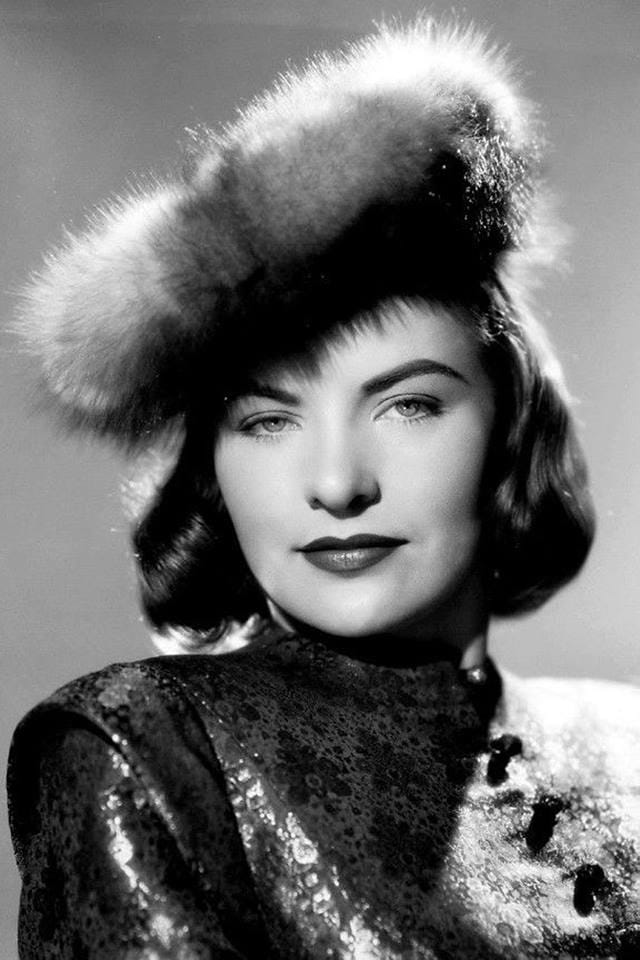 When Joan Harrison’s first producing venture, Phantom Lady, was released through Universal, the film’s success elevated her to stardom. She was now the “Mistress of Suspense.”

If asked at the time, she likely would have described this rise as part of her master plan. Joan always liked to remain in control. A signature piece of her planning for Phantom Lady was the casting of the female lead. The secretary-turned-detective Carol “Kansas” Richmond was an unusual character for 1940s film noir, but one with whom millions of wartime working women could identify with. Harrison envisioned a dazzler with verve — a newcomer who could win over the hearts of female audiences while turning the heads of men. And, whether consciously or subconsciously, she saw Kansas as an ideal self. Her choice for the role would help brand Joan and vice versa.

Ella Raines fit the bill. Having recently arrived at Universal, she was waiting her a big. She had appeared in Corvette K-225 and Cry ‘Havoc,’ but playing Randolph Scott’s girlfriend in a naval action movie (as she did in Corvette K-225) wasn’t going to showcase the full range of her abilities. It’s not clear how Harrison first became aware of Raines. She may have seen screen tests while developing Phantom Lady at Universal, or it might be that Raines’s agent Charles Feldman had a hand in bringing the two women together. (Feldman, who had begun as a Hollywood attorney before making his mark with talent, was one of the first agents to package multiple clients into one film and sell it as a unit to a studio. He was fast becoming L.A.’s first super-agent.)

The story of Raines’s discovery is fascinating in its own right. The twenty-one-year old, green-eyed, brunette beauty left for New York City after graduating from the University of Washington. (An elopement to Florida to marry high school sweetheart Army Captain Kenneth Trout before he shipped out threatened her degree status, but the ever-industrious drama-major worked out a way to complete her graduation requirements by writing a thesis on “How to Get into the Theatre.”1) Once in New York, she began her climb as a serious actress. (Her daughter Christine Olds notes that she was always more invested in ‘the work’ than stardust.) Raines even received a part in the show “Away We Go!” (which eventually became “Oklahoma!”), but walked away when she was informed there would be a delay.2

It was around this time, in late 1942, that she came to the attention of Hollywood. By one account, after producer David O. Selznick (Gone with the Wind, Rebecca) was alerted to her talent (and lovely looks), he arranged for a screen test in New York with budding Broadway actor Gregory Peck. When Selznick watched the tests, Charles Feldman was by chance sitting in. According to this version, as Selznick waffled on whether to sign Raines, Feldman negotiated a contract and whisked her away to California, to Selznick’s great consternation.3

I discovered an account that is a little less thrilling, but nearly as dramatic, among Feldman’s papers (located in the Louis B. Mayer Library at the American Film Institute). There were no screen tests (the decision to sign her was made based on modeling photos) and Selznick may or may not have been in competition (Feldman makes no mention of the producer). What is clear from the agent’s correspondence is that Raines’s fate hung in the balance of a new venture that Feldman was cooking up with clients Charles Boyer and Howard Hawks.4 Though “soft-spoken, self-effacing, and given to dark suits and quiet ties,” the agent was always a cunning businessman.5 The three men were debating whether Raines should be the first property for B-H (Boyer-Hawks) Productions, intended for the sole purpose of discovering, cultivating, and marketing new talent.

Raines wasn’t privy to the protracted quarrel taking place internally — and bi-coastally —through December and into January 1943. Feldman and Hawks felt strongly that she was the one. They contemplated leaving Boyer behind and approaching the Raines contract as a twosome. (Hawks, in particular, worried that including Boyer, or any third partner, would complicate their chances of financial backing.)6 As they edged toward the end of January, the desired February 1st start date for their first picture, Corvette K-225, appeared to be in jeopardy.

At the last minute, Hawks and Feldman managed to pull the necessary financing together for B-H, the kind of company that would allow Raines’s contract and their slate of films to go forward, from RKO. It was actually RKO executive Charles Koerner, who had just risen to general manager and was in the process of bringing the studio into the black, that orchestrated the deal.7 With RKO’s backing, the three men were ready for production. Feldman finalized the contract with Raines and delivered her from New York to Los Angeles, directly into the arms of Howard Hawks, in time for the first day of shooting.

According to Todd McCarthy’s Howard Hawks: The Grey Fox of Hollywood, the director promptly fell for Raines, wining and dining the actress at the Brown Derby before enticing her with the not-so-subtle equestrian pick up, “Do you ride?” Easily swayed, she spent the following two weeks at Hawks’s S-Bar-S Ranch. His recent marriage to socialite and fashion icon Nancy “Slim” Keith didn’t stop either of them. “I never saw Slim,” Raines recalls, and thought it best not to ask.8

Raines later admitted to having a very deep attachment to Hawks. The feelings were apparently mutual. According to McCarthy, “the fling with Raines may not have been Hawks’s first since marrying with Slim, but it was the most significant one.”9 Slim was the prototype for the director’s mannish, sultry “Hawksian woman” and would soon see her ideal image reflected in Lauren Bacall (originally Betty Joan Perske from the Bronx). (As the story goes, Slim noticed her in a Harper’s Bazaar photograph while flipping through the magazine’s pages and recommended her husband put her in a screen test.)

According to Molly Haskell, “Bacall’s Slim in To Have and Have Not is the purest expression of this dream figure [the Hawksian woman]: equal parts seductive and sarcastic, unerringly sure and self-possessed, sexually experienced but (in defiance of the puritan morality of the time) unsullied, tough yet tender, able to hang with the boys while remaining very much a woman, unquestionably independent yet unhesitatingly ready to commit to the right man, if he comes along.”10

Before Bacall, however, there was Ella, who embodied the alchemy of the Hawksian woman. With no professional acting experience, she had just signed a twenty-week contract at $300 per week plus an option for six-and-a-half years. But it was the men who felt lucky.