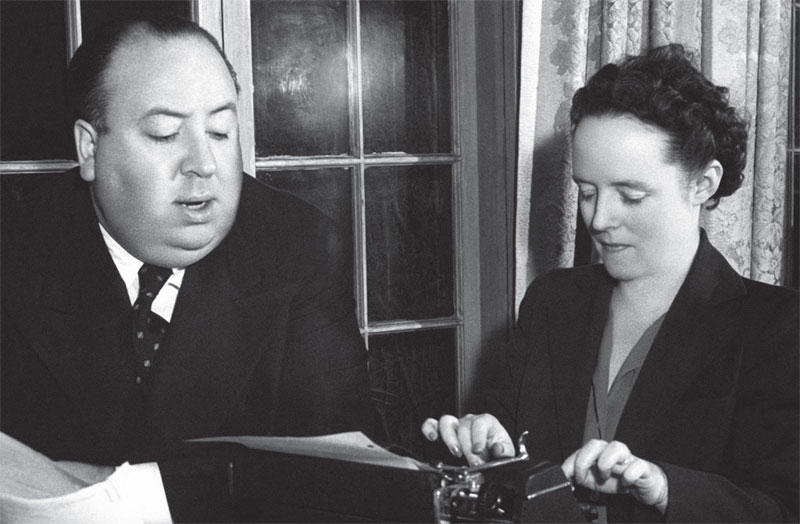 Joan Harrison’s story is incomplete without considering the importance of Alfred Hitchcock’s wife — and chief collaborator — Alma Reville. Joan joined Hitch and Alma in fall 1933 just as the director was making a crucial move to Gaumont-British Picture Corporation to develop The Man Who Knew Too Much (1934). There, Joan received a crash course in story construction and scenario writing, absorbing the ABCs while sitting in on meetings with contributors Charles Bennett, Angus MacPhail, and Reville.

It was during this time that Joan learned from Alma and Hitch the unique notation system that the director employed to translate the pictures that appeared in his mind onto the page. It was a set of private codes devised by the couple as they came up through the ranks, a way of communicating words and images shared by very few. Alma was the keeper of the keys, having been with Hitchcock since the 1923 feature film Woman to Woman, on which he served as writer, art director, and assistant director. (She was editor.)

That same year, Reville, considered tops in her field, wrote an article in the trade magazine The Motion Picture Studio in which she instructed, “First and foremost, keep in your mind throughout the whole process of cutting—your audience. Try and see your film as your audience will see it for the first time, follow your characters and continuity as they will follow it.”1 Her view of camerawork and cutting that positions the viewer in the characters’ perspective is conspicuously similar to Hitchcock’s way of talking about movie-making. And probably for good reason. The director credits his wife with schooling him in the essentials — her essentials — of cinema.

Alma was working in film a full five years before Hitchcock entered the industry. She began working as a “cutter” in the editing room at the age of sixteen and within two years was promoted to assistant to director Maurice Elvey (one of the most prolific in British history). She held positions as editor, floor director, continuity director, second assistant director, and occasionally actor. She would go on to play a crucial role in Hitchcock’s career, doing continuity, screenwriting, and consulting, while writing for other filmmakers as well. As many Hitchcock collaborators can attest, he would often address a difficult problem by saying, “I’ll discuss this with the Madame,” alluding to the advisory power that Mrs. Hitchcock held.2

If Alma was a valued advisor to her husband, she most certainly played an important role as mentor to Joan. This was especially true in the early years, as Joan’s learning curve was steep. It was rare at that time, in the male-dominated British film industry, to have the benefit of a female role model such as Alma. The two would become lifelong friends. It’s not that their relationship was without ups and downs, but the work never suffered. Joan Harrison and Alma Reville shared a powerful bond that has lived in the shadows for too long.

Tania Modleski. “Suspicion: Collusion and Resistance in the Work of Hitchcock’s Female Collaborators.” In A Companion to Alfred Hitchcock, edited by Thomas Leitch and Leland Poague, 162-180. Malden. MA: Wiley-Blackwell, 2011.