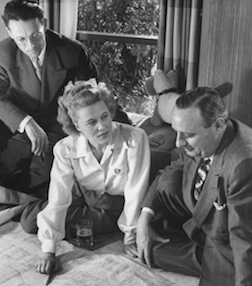 #PopcornTalk #TheFilmScene #ChristinaLane
Christina Lane is Chair and Associate Professor in the Department of Cinema and Interactive Media at the University of Miami, where she also directs the Norton Herrick Center for Motion Picture Studies. She teaches courses on film history, women and media, and directors. Her scholarship focuses on silent cinema, classic Hollywood, and contemporary American independent film.

Dr. Lane is the author of the forthcoming book, Phantom Lady: Hollywood Producer Joan Harrison, the Forgotten Woman Behind Hitchcock (Chicago Review Press). Phantom Lady is the first biography of one of the most influential women of Hollywood’s golden era, the woman who, working behind the scenes, shaped the screen style of Alfred Hitchcock, the master of suspense.

She is also the author of Feminist Hollywood: From Born in Flames to Point Break (Wayne State UP, 2000) and Magnolia (Wiley-Blackwell, 2011). She has published essays in numerous scholarly journals as well as Culture, Trauma, and Conflict: Cultural Studies Perspectives on the War (Cambridge Scholars, 2007), Feminism at the Movies: Understanding Gender in Contemporary Popular Cinema, (Routledge, 2011), Hitchcock and Adaptation: From Script to Screen (Rowman & Littlefield, 2014), and Indie Reframed: Women and Contemporary American Cinema (Edinburgh University Press, 2017).

She is a member of the Women Film Critics Circle.